One of Nationwide Louvre Company’s latest projects has been the design, manufacture and installation of 4 No. runs of Solar Shading which have been fitted to a new building for a school in London. The primary brackets on this project were installed prior to the rendering being completed which meant that only a small stub was left to secure the panels to, hiding the majority of the brackets / fixings.  There were five individual runs in total consisting of 3-5 panels in each. 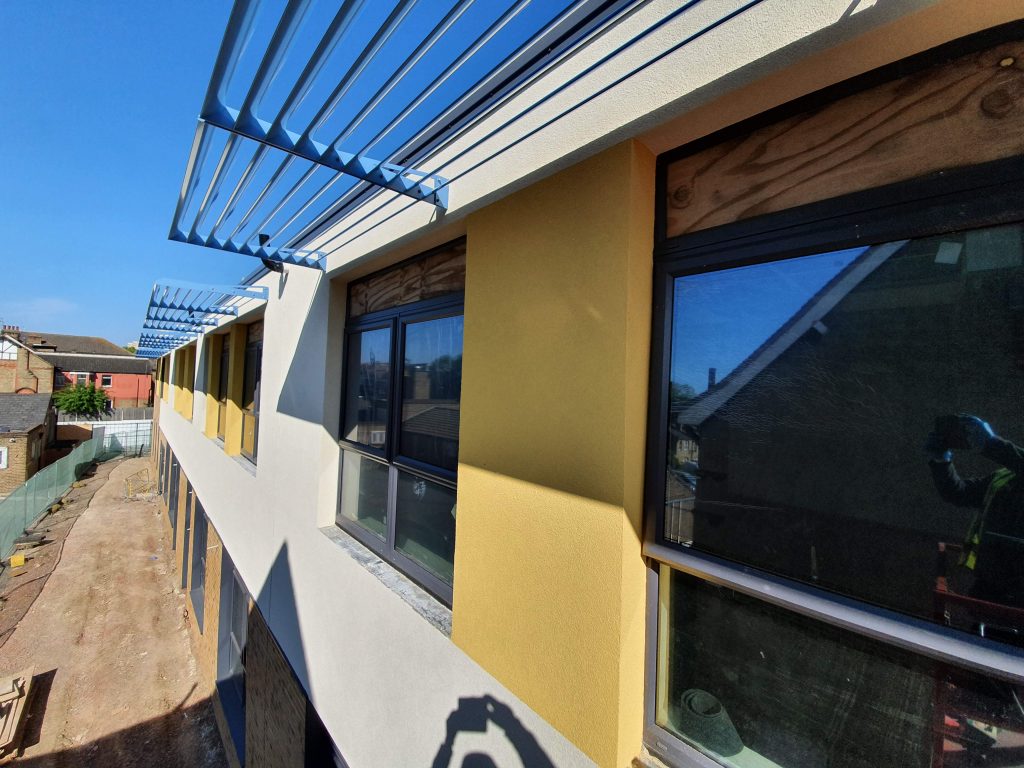 NLC recently completed the installation of these runs of Vertical Brise Soleil to a brand new Sports Facility. The primary brackets were installed prior to the cladding so there is minimal bracketry on show giving a nice neat finish to the building.

The project shown below consisted of NLC’s horizontal Brise Soleil panels fixed to primary support bracketry which is mostly hidden behind the cladding. Vertical stainless steel feature wires were used to join the ground floor brise soleil to the first floor brise soleil. 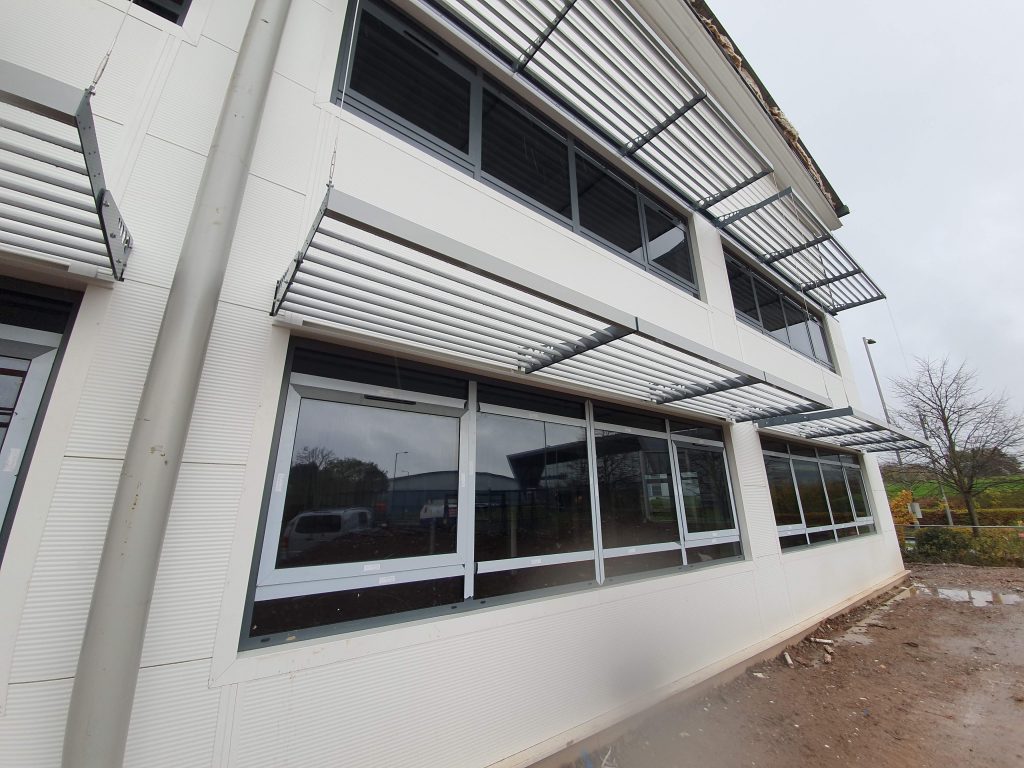 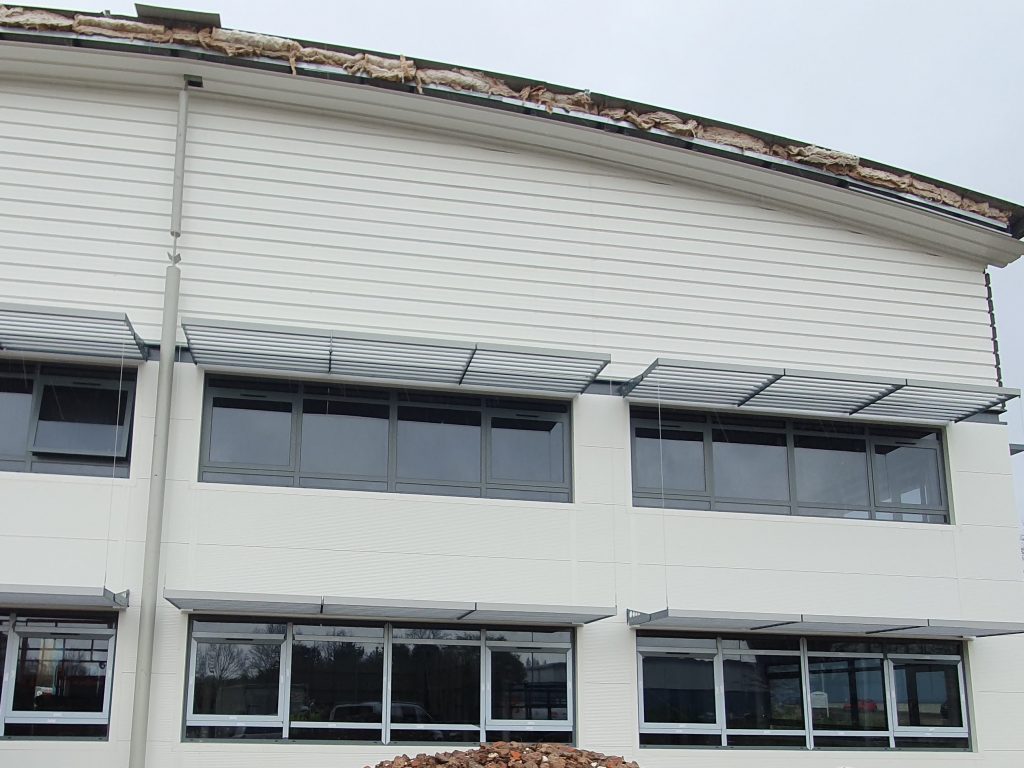 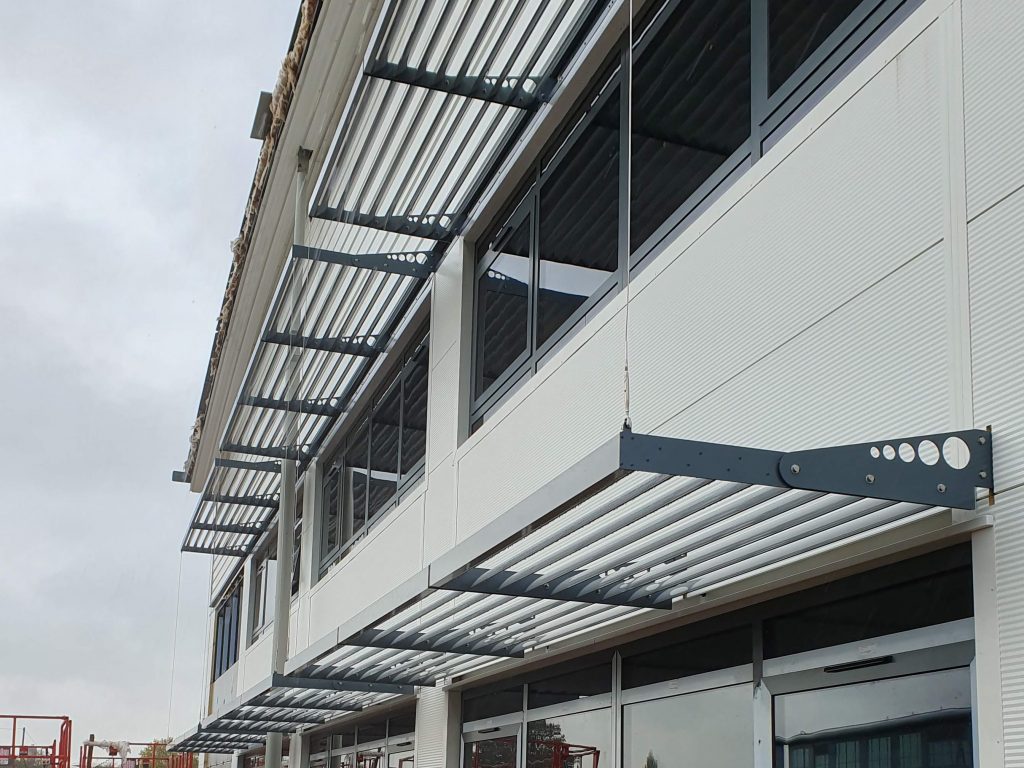 NLC’s latest project came in the form of our 300mm elliptical blade system being used vertically with each blade being individually fixed to horizontal linear rail supports. There were 6 separate runs on this particular project all varying in length with the biggest run being 25 meters long. The large blades provided excellent shading results for the classrooms on the ground floor and first floor of this modular building. On completion the customer was so pleased that the planned extension was brought forward and work started immediately. 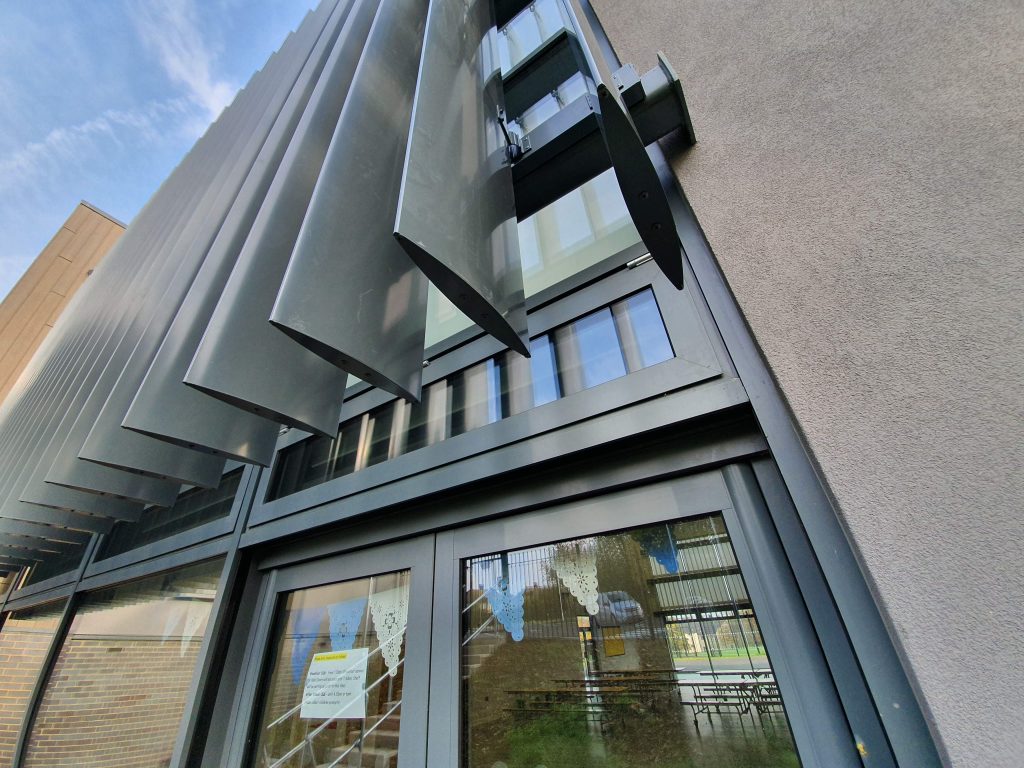 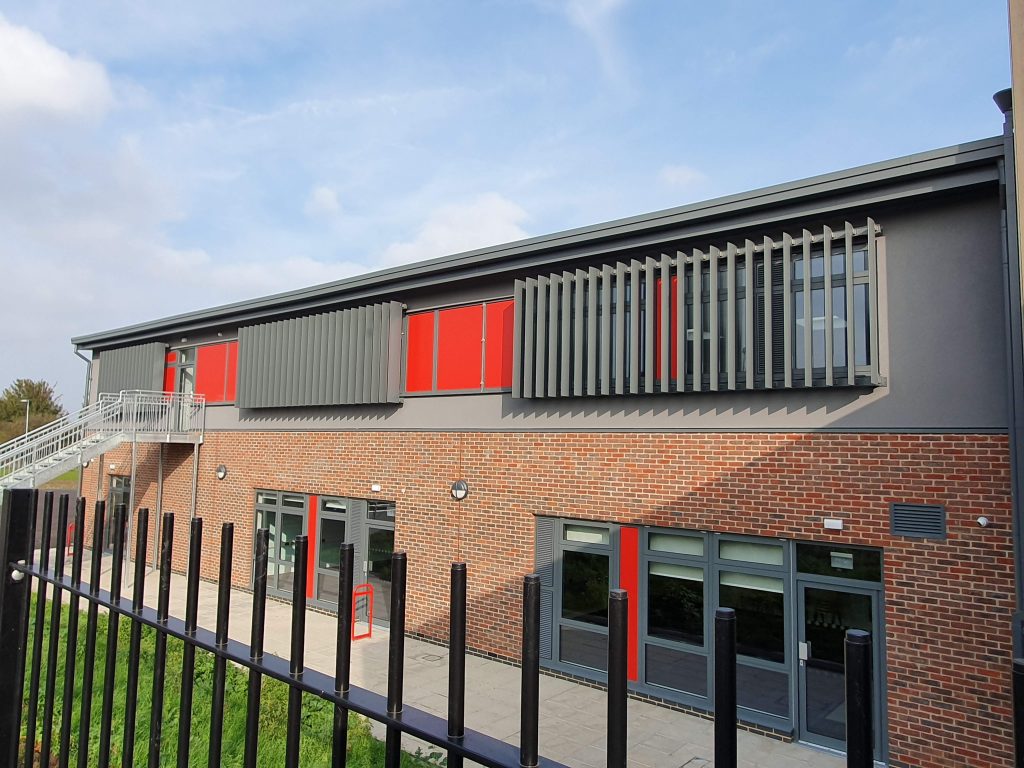 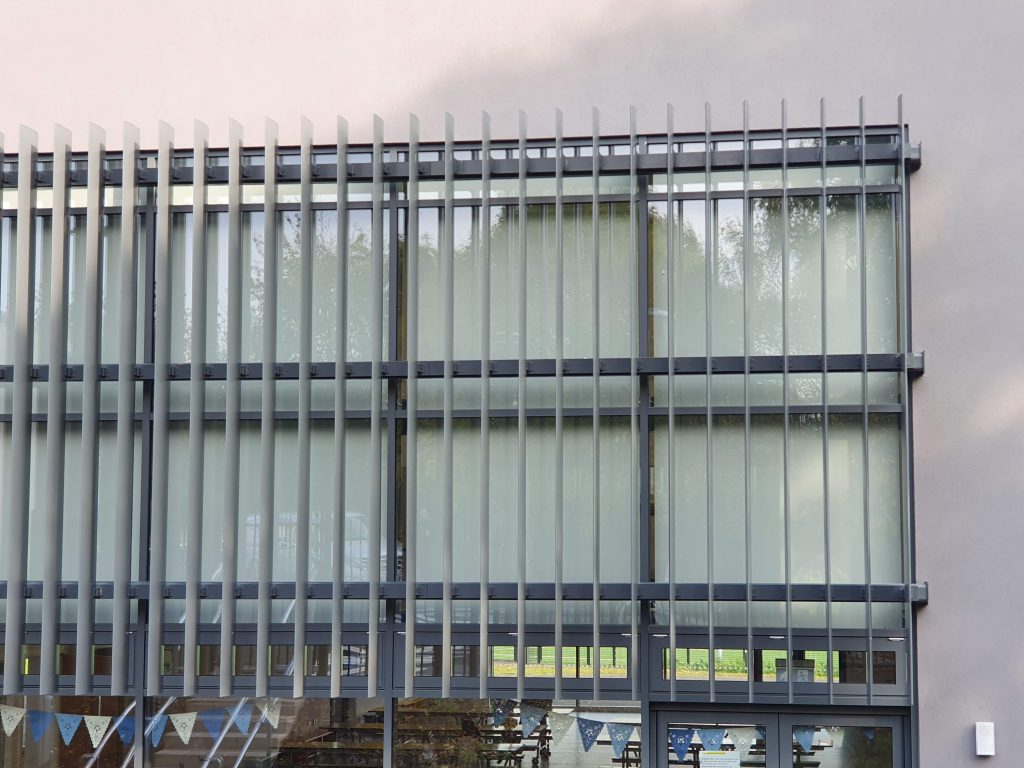 The images below show a project NLC has recently completed on a luxury residential apartment complex in Shepherds bush.
These vertical aluminium solar shading panels were fabricated using our SOL300 elliptical blades. The blade pitch was originally set at 45 degrees however these particular blades were fitted using a rotating socket allowing for up to 90 degrees rotating meaning the residents can rotate the blades to follow the sun throughout the day to keep solar gain to a minimum and block the windows for privacy. 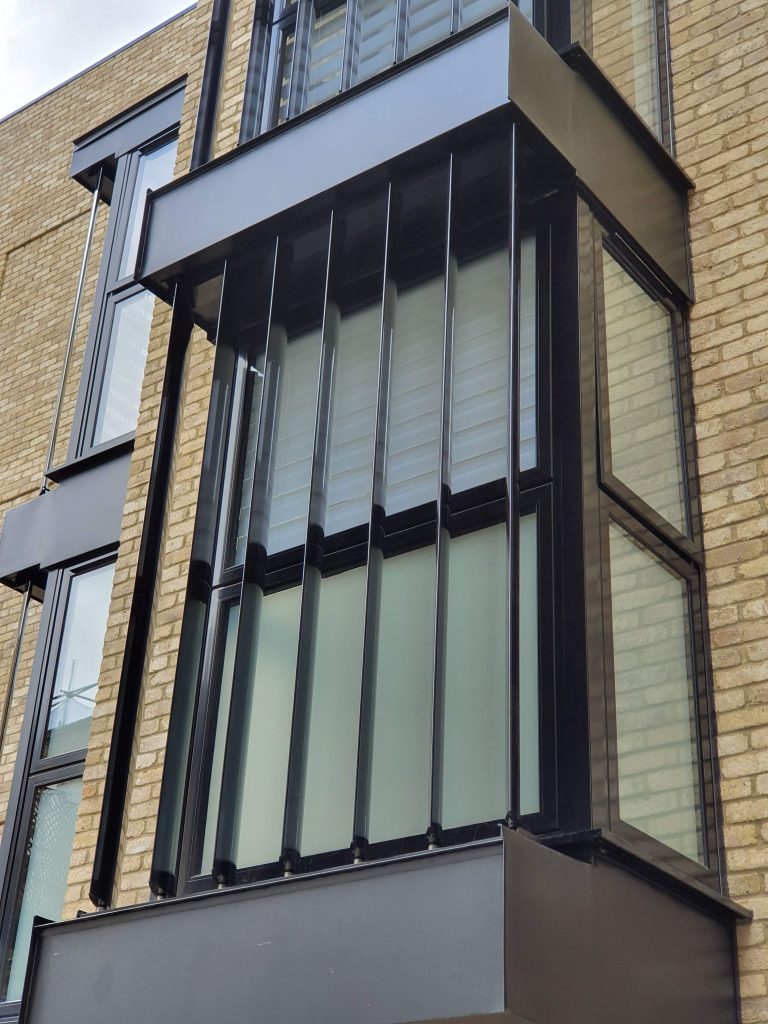 Nationwide Louvre Company’s latest project was to fabricate and install a louvre screen on the roof of an office development in Stratford. This was designed to screen the air conditioning equipment on the rooftop whilst adding an additional layer of security.
The louvre screen features one full welded louvre door complete with lock allowing for easy access to the equipment for any maintenance that may be required. 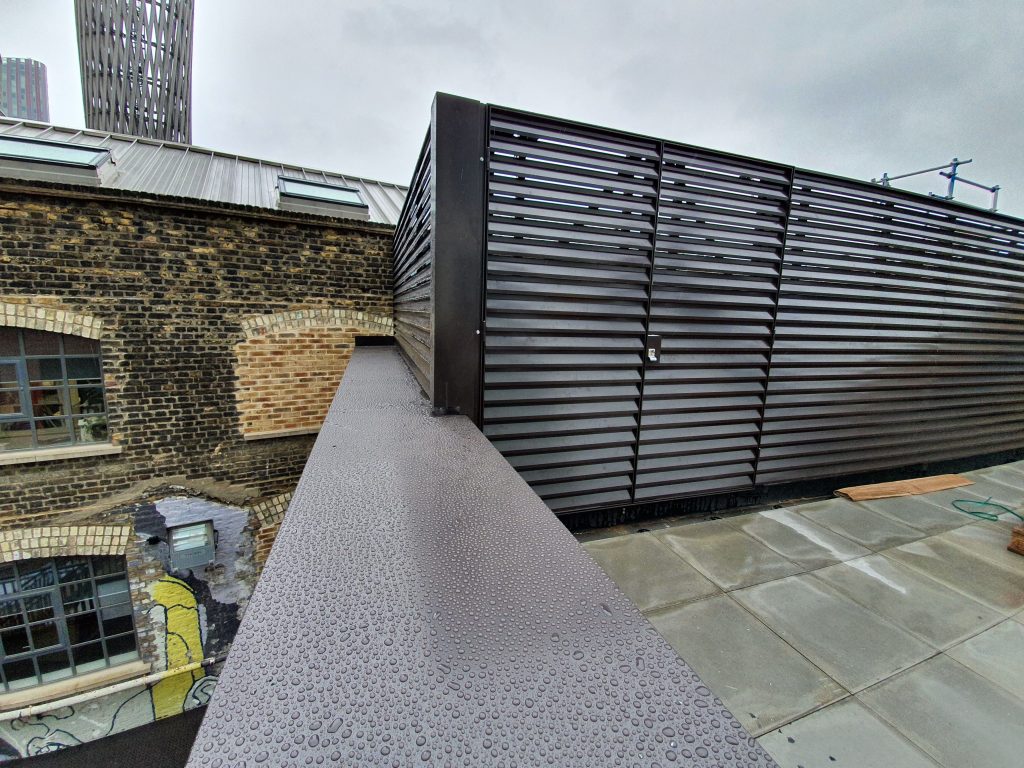 NLC has recently supplied and installed a number of horizontal brise soleil to a new academy in Etonbury. These panels were fabricated using our aluminium SOL120 elliptical blades to ensure maximum performance and strength. 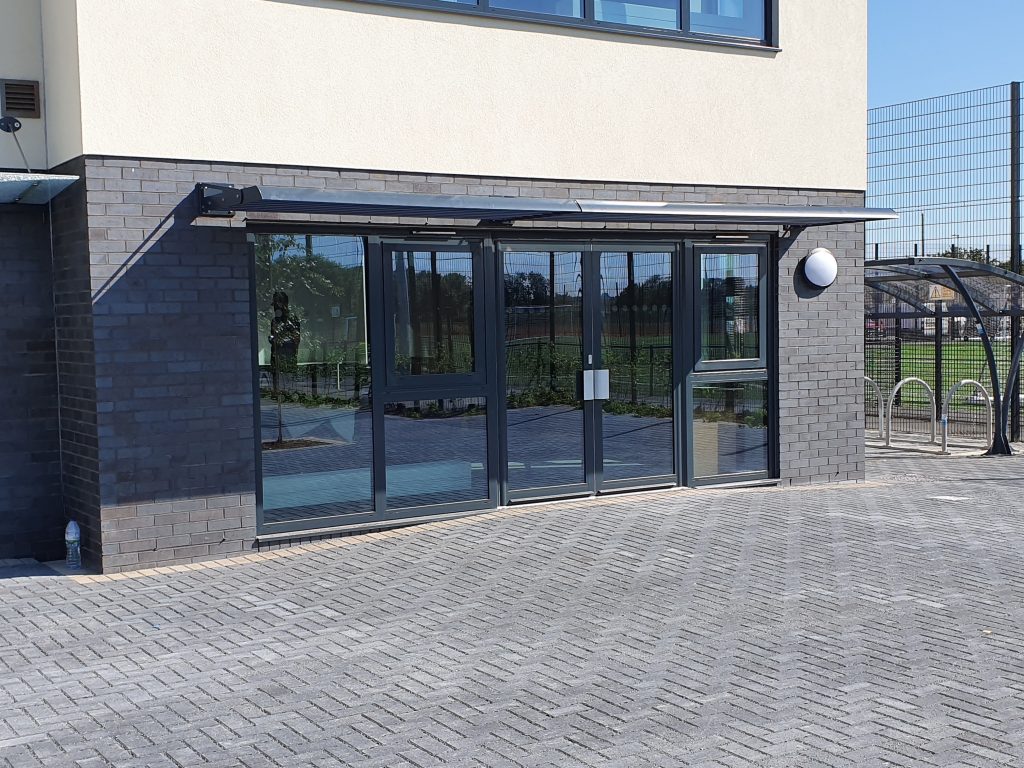 NLC recently supplied and installed of 3 No. runs of horizontal brise soleil to a residential property in Caldecote. Each run was also fitted with a diagonal support bracing system due to the panel projection being over 1200mm from the face of the building. 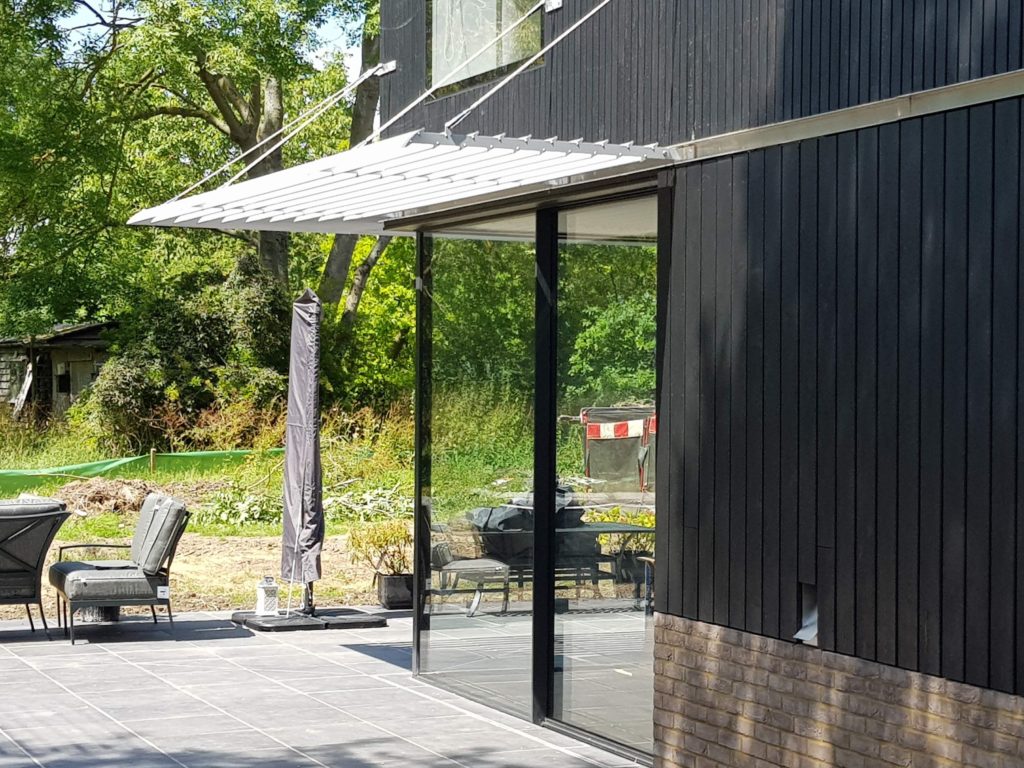 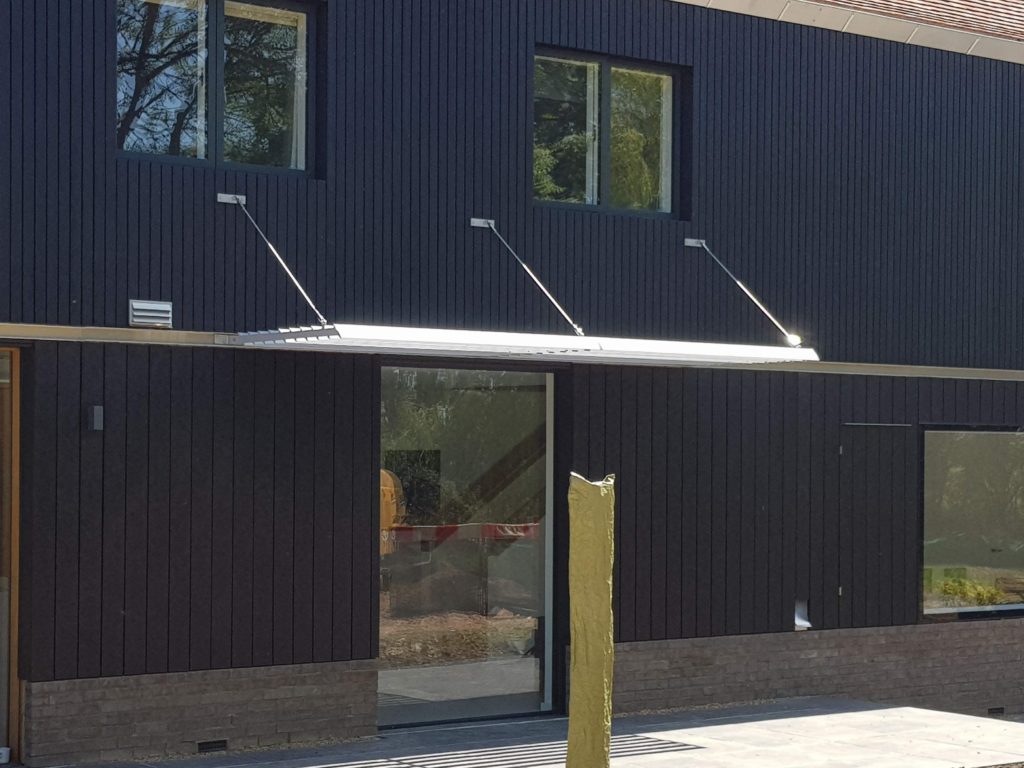 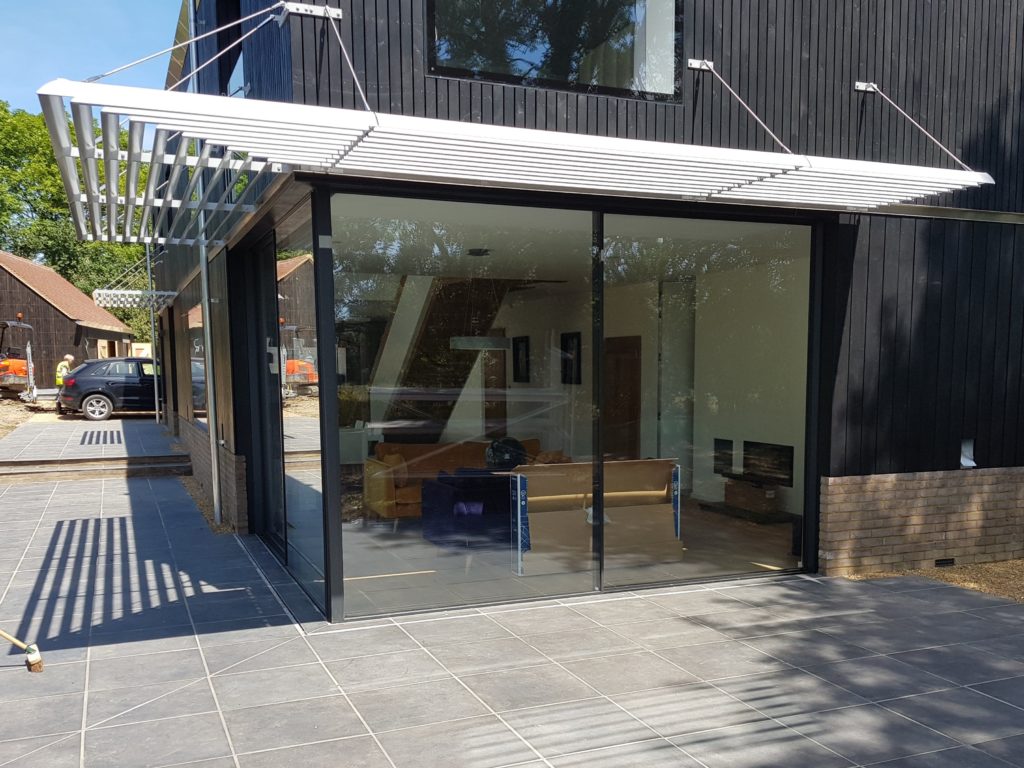 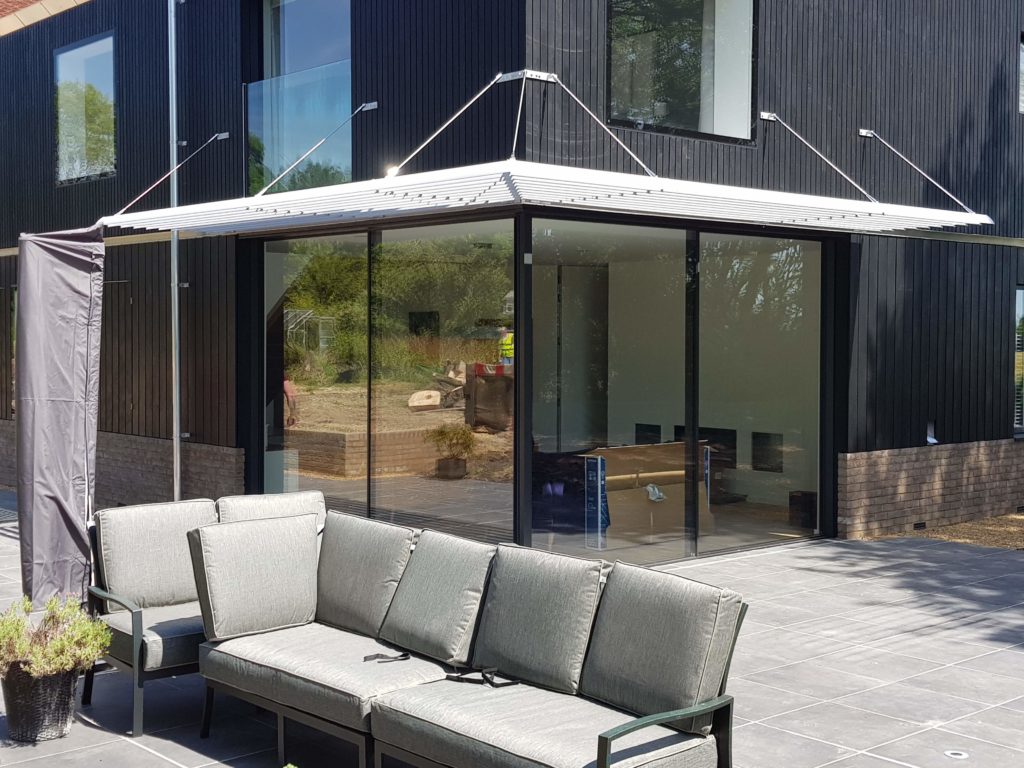 With this particular project NLC were asked to design both vertical and horizontal Brise Soleil. Due to the size of the window and shading requirements the vertical panel was designed in a way in which was able to support the central two horizontal panels on the first floor run of shading. This enabled the shading system to be as effective as possible by completely shading a large portion of the first floor windows. The primary brackets were fixed directly onto the face of the brickwork with secondary supports coming off those for the horizontal brise soleil; and a box section frame for the vertical panel. 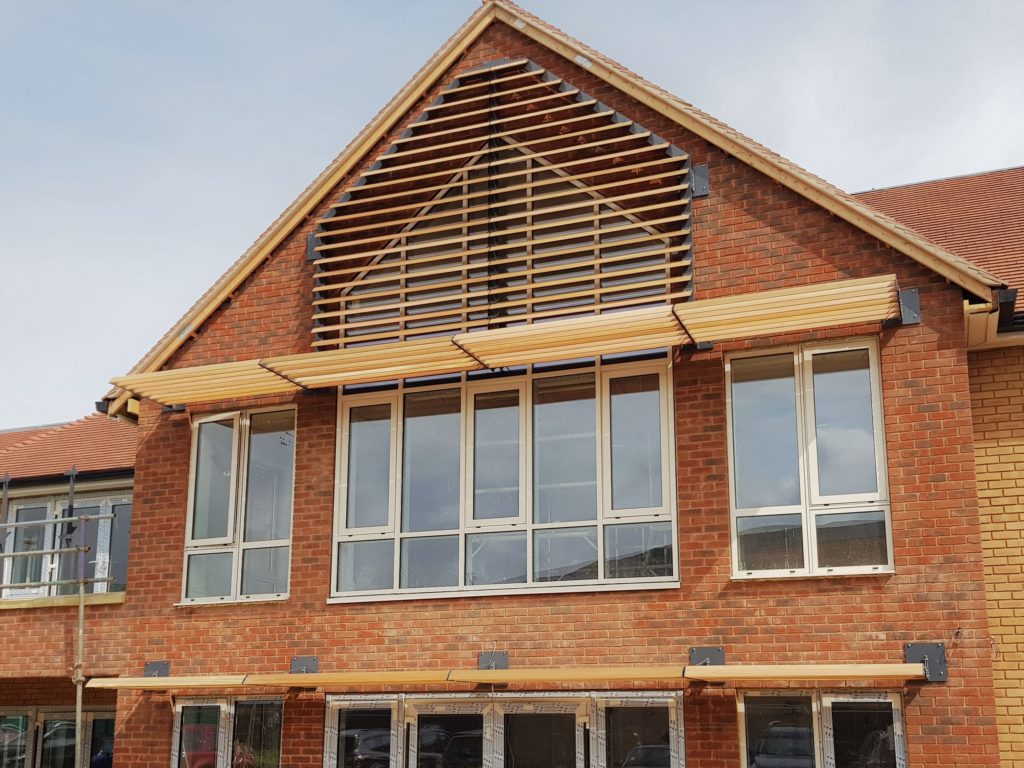 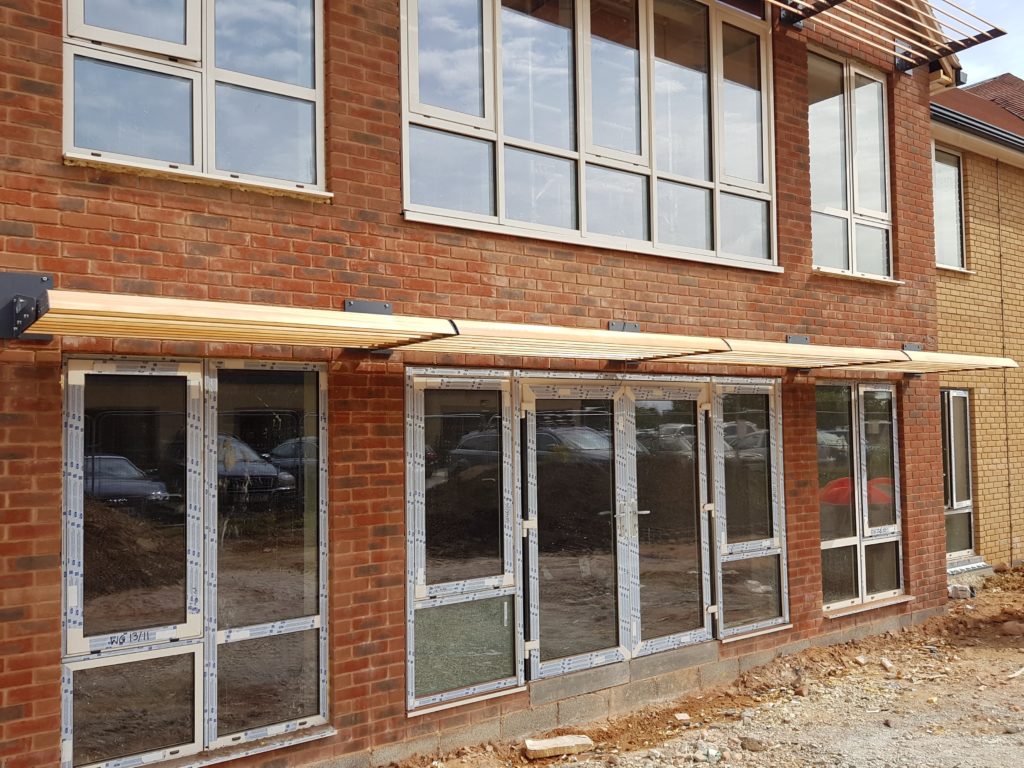 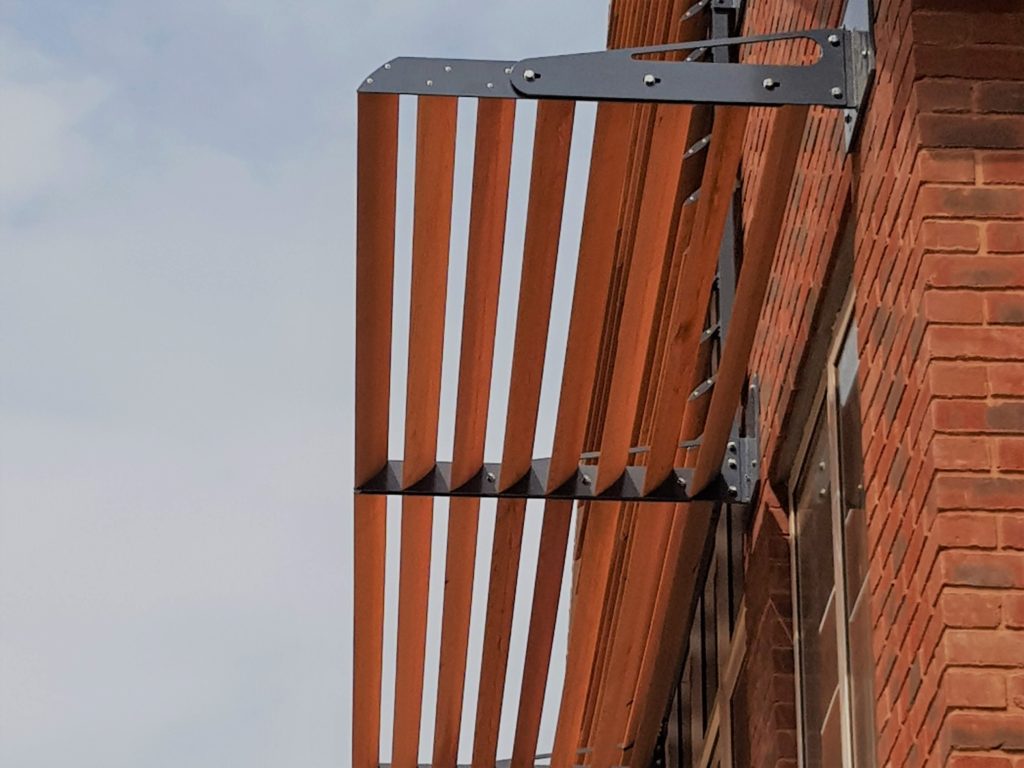 On the Somerhill School project Nationwide Louvre Company designed various shading panels to suit the requirement of each location on the building. As shown on the images there were multiple fixing methods used and also different types of panels. The two large triangular panels and the small square panel between them were fabricated using aluminium box section frames complete with bird-beak brackets and 120mm elliptical blades. The panels in the long run down the side of the building were manufactured using laser cut 5mm thick side frames with 120mm elliptical blades screwed to them from either end, supported by vertical box section posts. Horizontal Brise Soleil panels were used above the entrance and reception window and these were fabricated in the same way with the 5mm thick side frames. The small panel into the opening at floor level were also fabricated with 5mm thick side frames and it was fixed directly to the brickwork through both frames. 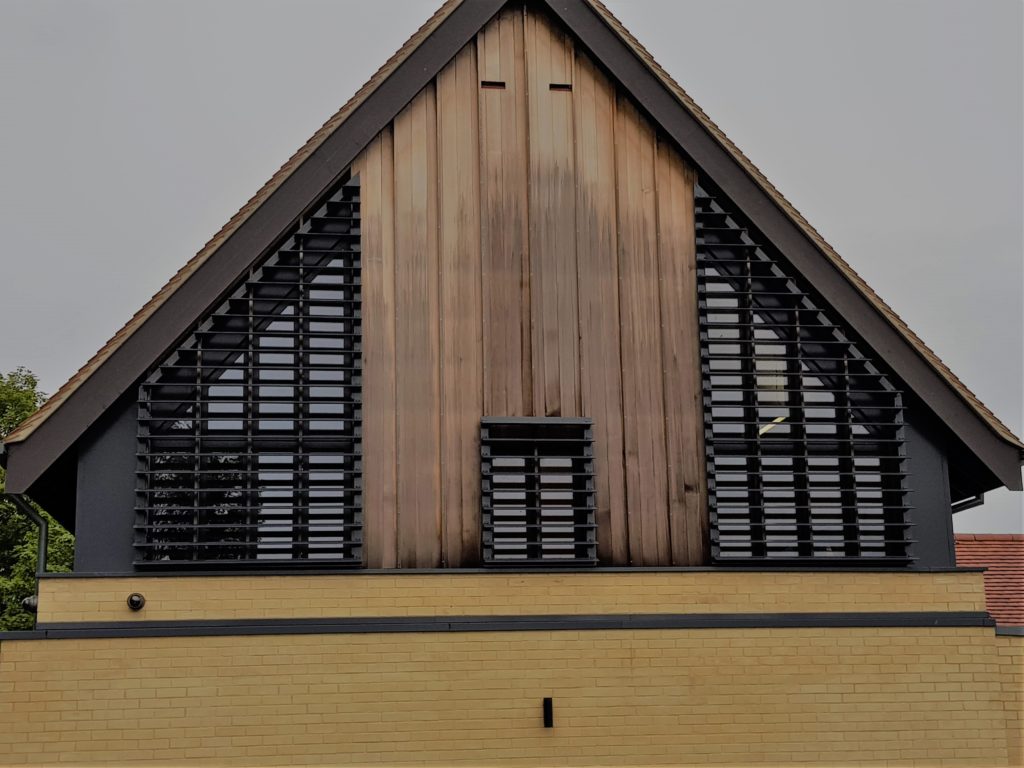 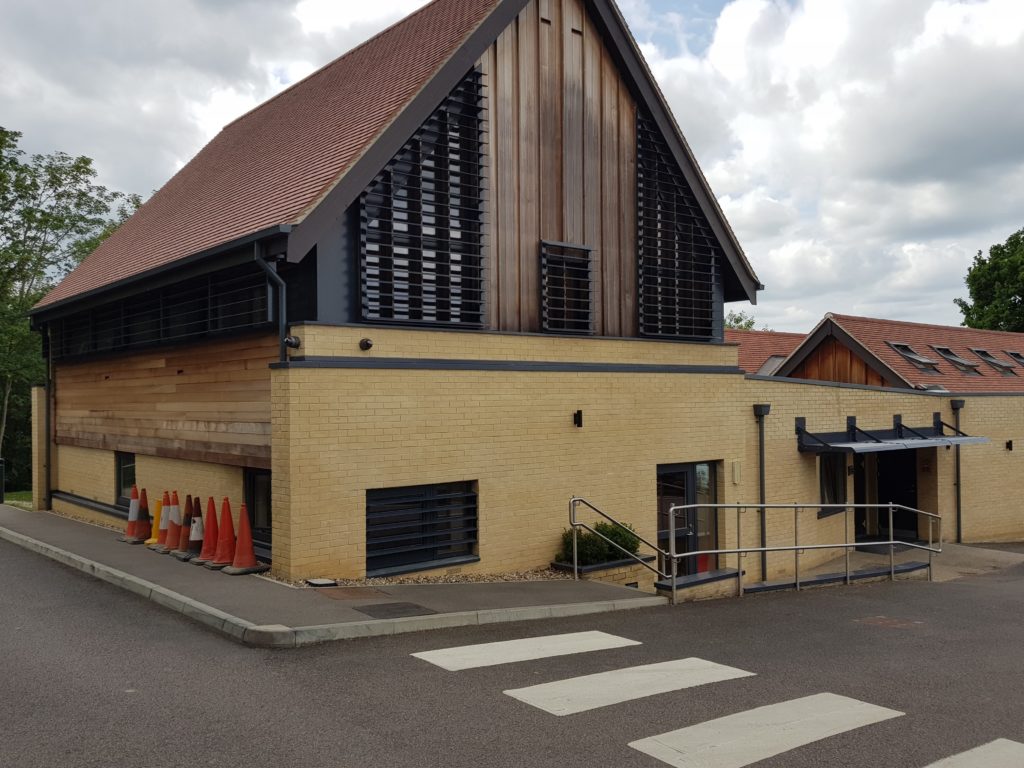 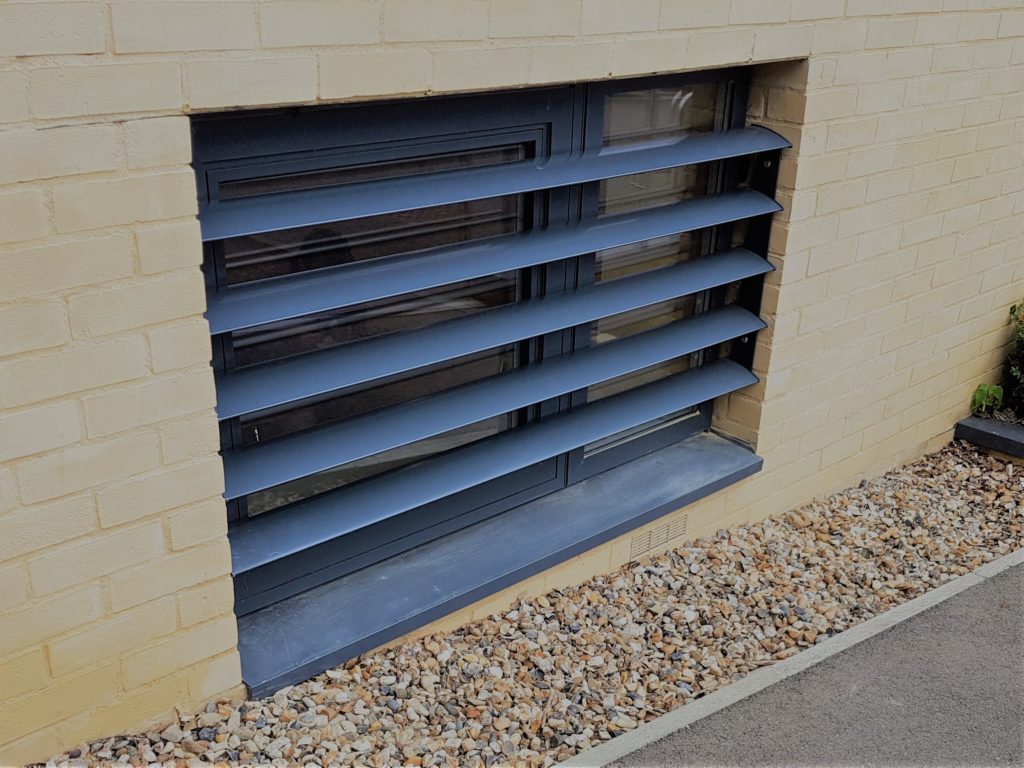